At breakfast on Tuesday 1st August…

The speaker was Phil Merry. Phil runs his own business, Focus Media but he is also Communications Director of Peacehaven & Telscombe Community Football Club. 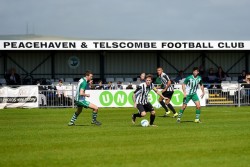 A successful period saw the club enjoy two consecutive promotions which culminated in playing in the Ryman Premier League (which is just three promotions away from playing league football) and they also won the Sussex County Cup.

This success was then quickly followed by two successive relegations which resulted in the club having to deal with spiralling debts of nearly £80,000.

The future looked bleak.  Creditors were knocking at the door. But a group of like-minded people got together and formed a plan to drag the club back from oblivion.

Phil’s presentation will coverd this remarkable story of triumph over adversity and how the club was turned around.

He’ll also told us a little bit about how his love for football shaped his life which saw him play professional football in Australia and in the Hong Kong First Division where he inadvertently got mixed up with the notorious Triads!